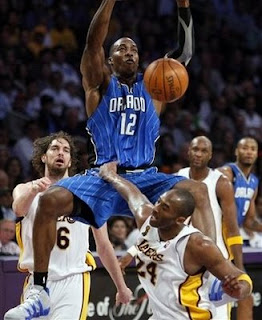 Dwight Howard, aka Super Man, is the hottest trade talk basketball player right now.  With teams jumping at the chance to have him on their team, he is showing the world that he is well worth this kind of treatment.  He is averaging 21.1 points, 15 rebounds, and 2 assists per game.  He has helped his Orlando Magic move up to third place in the Eastern Conference and they have won five out of six of their last games. Who knows where he will end up, but as of right now the Orlando Magic are riding high with a chance to take over the East
Posted by AME SPORTS ZONE at 2:28 PM