Ame's Player Of The Week 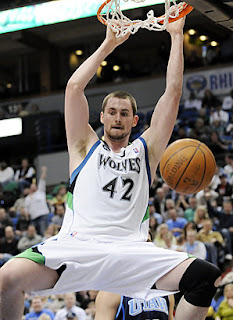 Lately Kevin Love has been playing phenomenal. He dropped 51 points in the game against the Oklahoma City Thunder on last Friday night,  March 23, setting a franchise record for most points in a single game. Then he followed that game by hitting 30 points and having 21 rebounds to beat the Denver Nuggets on last Sunday, March 25. He is averaging 26.3 points, 13.8 rebounds, and 1.9 assists per game.

He would be in the mention for the MVP award this year, but his team is loosing to many games. The Minnesota Timberwolves are 24-27 and are 3 games back of the 8th spot in the Western Conference. However, this is called player of the week and not team of the week, so Kevin Love wins this round hands down.
Posted by AME SPORTS ZONE at 1:07 PM